Our talented boys have finally done it! They won the 41st Annual Inter School Shakespeare Drama Competition, held on the 20th September 2014 at the Bishop’s College Auditorium. This is the first time that Ananda has won this prestigious competition, which is the pinnacle of inter-school drama and one of the most keenly anticipated English theatre events in Sri Lanka. The excerpt our Anandians’ chose to perform this year was from “Timon of Athens”, one of Shakespeare’s least known, least performed and least loved plays. It is extremely difficult to perform because the script exists only in very rough form. Despite this disadvantage, and the stiff competition faced, our very experienced cast – ten of whom had participated at this competition at least twice before – saw us through. 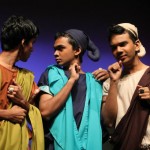 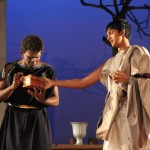