We are proud to announce that our group has participated in supporting the Bureau of the Commissioner General of Rehabilitation for their get-together of the officers. We have donated a sum of Rs. 15,000 from the 99 Group which will go towards a T-Shirt project that will be handling by the bureau.

Brigadier Dharshana Hettiarachchi (Commissioner General of Rehabilitation), Colonel Dharshana Liyanage (Deputy General of Rehabilitation), Colonel Pradeep Perera (general staff) and Captain Niroshan Rathnaweera (rehabilitation, release and monitoring – also has been the contact for 99 group) was there to accept the donation and the 99 Group was represented by the president Minidu Abesekara, Secretary D K D A Deshapriya and committee member Manoj Lanka (who has been the contact to bring this event to the 99 Group).

We have learnt how challenging it is to rehabilitate the country specially in directly war affected areas and the difficulties faced by authorities and rehabilitation personnel involved with the operation. We were very happy to be part of this task and help the bureau for their projects. 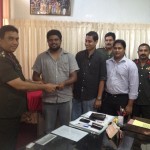 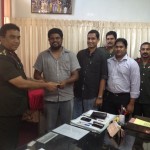 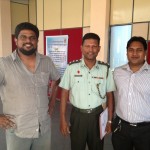